A few months ago I got a new work computer.  Since it was a good opportunity to start fresh I didn’t transfer all the programs from my old one to the new.  And one of them I neglected to transfer was ASDM.  I wasn’t too worried about it since I often manage my ASA firewalls via the terminal using PuTTY.  But I had a need for ASDM recently so I downloaded it and ran it from my computer, but to my chagrin I received the message, “Unable to launch device manager from…”  Crap!

Since I couldn’t remember exactly how to download ASDM from my ASA and it took me a bit to figure out.  And since I wanted to upgrade to the latest anyway, I thought I’d write myself a reminder here so in a year or two when I get a new computer I don’t have to go through this same trouble again.  I hope others find it useful as well.

First, download the latest ASDM bin file from Cisco (you’ll have to have a valid SmartNet contract to access the downloads section).  At the time of this writing the latest version is asdm-645.bin.

With that downloaded use something like TFTP to copy the file to the ASA.

Next, register the ASDM bin with the ASA.

NOTE: the ASDM version needs to be compatible with the IOS on the ASA.

Finally, access the ASA’s admin interface with https://<LAN_interface_IP&rt;/admin.  NOTE: this has to be on the LAN interface, either from a computer running inside the ASA, or for an external computer connect via VPN, then access ASA’s LAN interface. 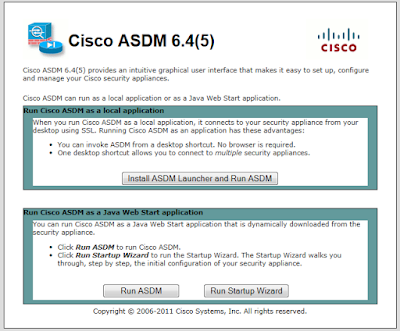 Click the link, “Install ASDM Launcher and Run ASDM.”  Follow the steps to install and connect to your ASA.