I opened my email this morning and much to my pleasure I found this announcement from Amazon:


Of course, I had to give it a try.  I accessed my account with Elasticfox and browsed through the images, but didn’t immediately find a Windows 2008 image, so I headed over to RightScale, found what I was looking for and immediately launched an instance.  I launched it through RightScale (which I do sometimes anyway) because I was in a hurry to get to a meeting and didn’t see the AMI ID.  So I started it and headed to my meeting while it spun up. 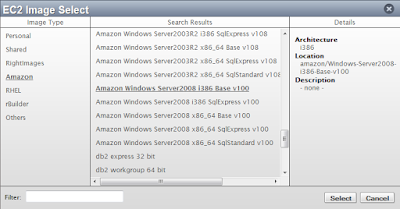 Now that I know the AMI (ami-5a07e533) I can launch instances in the future from the command line using Amazon’s command line tools:

Once it was up and running I got the administrator password in ElasticFox, launched RD & went to work checking it out and setting it up to suit my needs.


Here are some of the things I noticed:

Of course I had to check the Windows Update status & found it needed 14 “recommended” or critical updates, which I promptly installed.  Probably 1/2 of these were release two days ago by Microsoft on Patch Tuesday.  But even still I hoped the image would have been a little more up-to-date.


While the updates were downloading and installing I tweaked my desktop a little so it would be setup the way I like.


Next I bundled the instance and shut it down.  I used RightScale for the bundling because their interface is easy to use and does it all in one step.  Now I have my own “customized” image to start from when I’m ready to work with Windows 2008 on Amazon EC2 in the future.

All in all I’m glad Amazon finally supports Windows 2008 & it seems to function just fine.  My existing tools, from ElasticFox, to RightScale, to Amazon Command Line Tools, all work with Windows 2008 without any upgrade or modification, which is a definite plus.  I was a little disappointed my small instance has 320GB less storage than a small Linux or Windows 2003 instance, which means I’ll have to pay $32/mo. more to get that back – the more I think about it I’m a lot disappointed about the hidden price increase.